25th anniversary of the death of firefighter Fleur Lombard 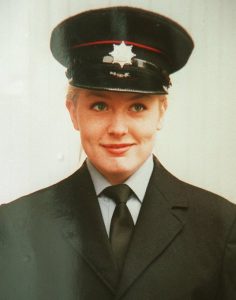 Staff from across Avon Fire & Rescue Service have observed a minute’s silence today to mark the 25th anniversary of firefighter Fleur Lombard’s death while fighting an arson attack in Staple Hill.

Some firefighters joined the community of Staple Hill at 11am at a social distance to remember 21-year-old Fleur, who was posthumously awarded the Queen’s Gallantry Medal and Chief Fire Officer’s Commendation in recognition of her bravery.

The memorial to Fleur outside Staple Hill Library bears the inscription: “She was an inspiration to us all.”

Fleur had been fighting a serious fire in Leo’s supermarket on Sunday 4th February 1996 when together with fellow firefighter Robert Seaman, she entered the building to search for missing persons and to help contain the fire. But conditions deteriorated and she was caught in a flashover and killed by the intense heat.

The fire was started deliberately by a security guard at the supermarket, who was sentenced to seven years for manslaughter and arson. 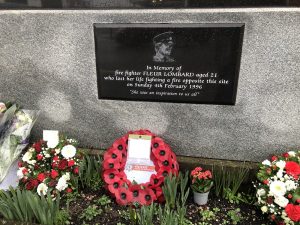 In a tribute Avon Fire & Rescue Service said: “Today marks the 25th anniversary of the tragic death of firefighter Fleur Lombard. It’s hard to believe it’s been a quarter of a century since the death of Fleur, her loss is keenly felt across the service and our thoughts remain with her loved ones. Gone but never forgotten.

“On graduating in 1994, Fleur received the Silver Axe Award, for most outstanding recruit in her training school. Fleur was the only female firefighter to die on duty in peacetime Britain.”

Staff across the service, whether working from home or socially distancing in the workplace or on station, observed the minute’s silence today. Among those also paying tribute today was Great Western Railway which celebrated Fleur by naming a new Intercity Express Train in her honour in 2019.