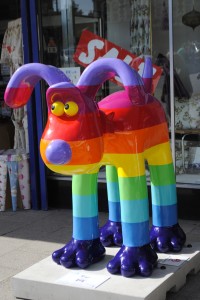 Roger, the Gromit that drew visitors to Staple Hill over the summer

Roger, the handsome rainbow coloured Gromit that graced Fountain Square in Staple Hill over the summer, sold for £29,000 last night. He was one of 81 statues auctioned in aid of  Wallace & Gromit’s Grand Appeal  which raised more than £2.3 million towards the £3.5 million campaign for pioneering new facilities at Bristol Children’s Hospital.

Roger, designed by Richard Williams, had been outside the Top to Bottom shop since July, thanks to sponsorship by the business owner, Frank Francis.

The auction was held at Cribbs Causeway shopping centre. One statue, Gromit Lightyear, designed by animation studio Pixar and based on the Toy Story character Buzz, which spent the summer at the Showcase Cinema de Lux, sold for £65,000.

While the majority of the sculptures were based around Bristol, there were others at Paddington Station in London, at Westonbirt Arboretum, Cheddar Gorge and Hawkesbury Upton.