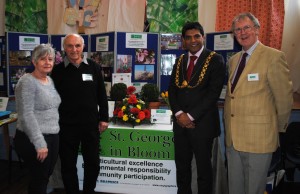 The Lord Mayor talks to Denise James, Trevor Ball and Grenville Johnson at the St George in Bloom stand

The fair, held at St Aidan’s Church and neighbouring church hall, was a chance for local organisations to showcase what they are about to the local community.

The event, which was also attended by local MP Kerry McCarthy, saw the official launch of St George in Bloom 2014 competition, which aims to encourage the community to take a pride in the area, making it attractive with flowers, landscaping or an environmental project.

The group will also be entering St George in the Pennant category of the RHS South West in Bloom Competition.

At the launch youngsters had the chance to plant sunflowers in little pots to take home and grow.

There was a chance to find out about Arts at St Aidan’s, which is holding a programme of summer proms in June, and other local churches were also represented at the fair.

The local Labour councillors for St George – Fabian Breckels, Ron Stone and Steve Pearce, had a stall as did the St George Neighbourhood Action Group (SNAG) which is fighting controversial traffic proposals for Crews Hole and Beaufort Road. 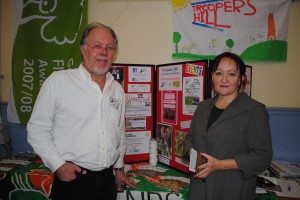 Kit Elliott, from the Friends of Troopers Hill, with MP Kerry McCarthy