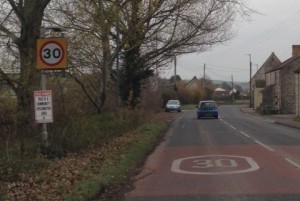 Nearly 100 speeding drivers were caught in just one hour by a police mobile camera van in Farmborough.

All will be fined £100 and have three points added to their licence, or will be offered the choice of paying £100 to attend a speed awareness course.

Local beat manager PC Samantha Kayser said: “We’re not pleased at all to have caught so many drivers in such a short space of time, but we do hope it will  send a strong message to motorists that we will enforce the speed limit through the village. What we really want to do is educate drivers to slow down and not to break the law.”

Last week was the first time that a mobile speed detector van had been used in Farmborough, and followed traffic monitoring by a recently-formed Community Speed Watch (CSW) group of volunteers. They found that so many drivers were breaking the 30mph limit on the A39 that police could not cope with the volume of administration of sending out warning letters.

PC Kayser said: “This shows that people can have an impact on an important issue in their community. Local people identified the speeding problem, we helped them set up the Speed Watch group, and they’re having an immediate effect.”

She warned that the mobile camera van would be returning to Farmborough and that the police were also working with the highways authority to consider other ways of encouraging drivers to slow down.

Since the Farmborough Speed Watch group was set up in August, nearly 3,500 vehicles have been monitored and 295 caught speeding. The highest recorded was 58mph.

PC Kayser said: “CSW gives local communities the opportunity to get actively involved in road safety. A group can be set up in any village, town or urban area, with local neighbourhood officers giving practical advice and support. It’s all about education really, getting drivers to recognise speed limits and to drive legally and safely.”