Joan and Derek Seville invited family and friends to join them aboard a special train at Bitton last week to celebrate their 60th wedding anniversary. Great grandparents Joan, 85, and Derek, 86, met at work and their first date was at a ball to celebrate the birthday of the then Princess Elizabeth and were married two years later at St Anne’s Church in Greenbank. The couple were inspired to have their celebration at the railway after attending one of the regular on-board dinners held by AVR and their son has also been a volunteer there for decades. And the secret for a long and happy marriage – “give and take,” Joan said. 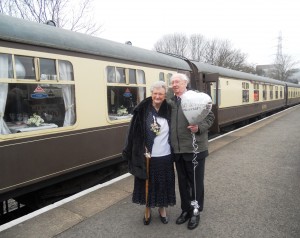